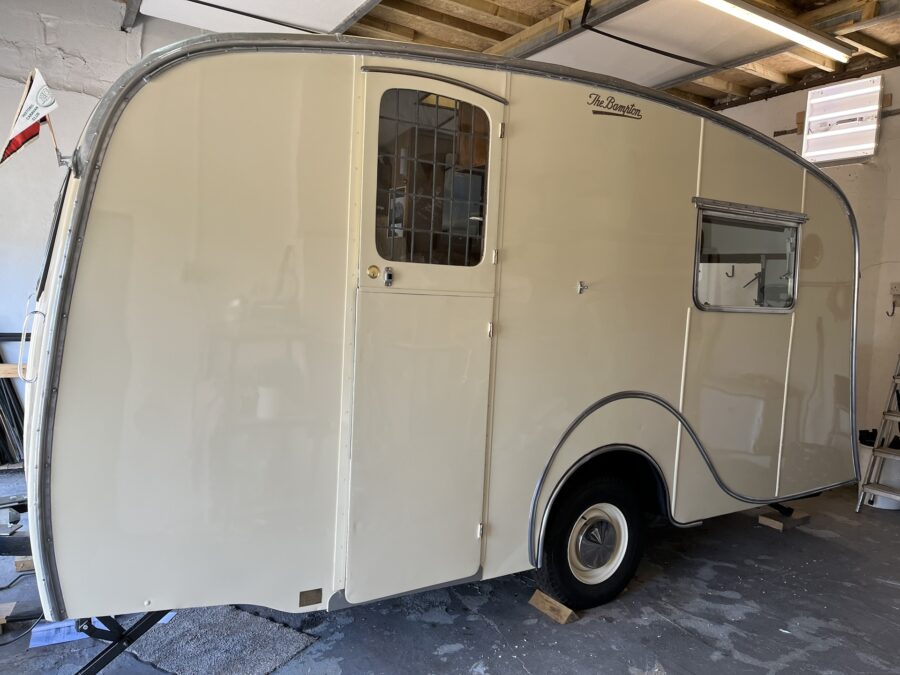 I had been looking for a vintage caravan to renovate as a project for several years. All the ones I had been to see though did not have many of the original features left, and had been “improved” over the years.

During lockdown in September 2020 I came across an advert on eBay for a 1951 Bampton caravan, in more or less original condition situated in Kettering. Being locked down in Wales, I had to bid on it sight unseen.

After making the winning bid we had the problem of bringing it back home. As it was ostensibly towable, but needed new tyres, to get a mobile tyre fitter out to fit them on the sellers premises, would have cost more for one tyre that my local fitter wanted for three! I had a very good quote for transporting it down on a trailer, and as we were still locked down, that seemed to be the best option.

It was built in 1951 by the firm of Bamptons in Swindon, who were mainly coach builders and vehicle repairers. They only built caravans when their other business was slack. Mine in No.34, and it is believed that in total they built less than 40.

Doing some research, using the paperwork that came with it, I traced and contacted the family that had bought it in 1954 and who had owned it for many years thereafter. 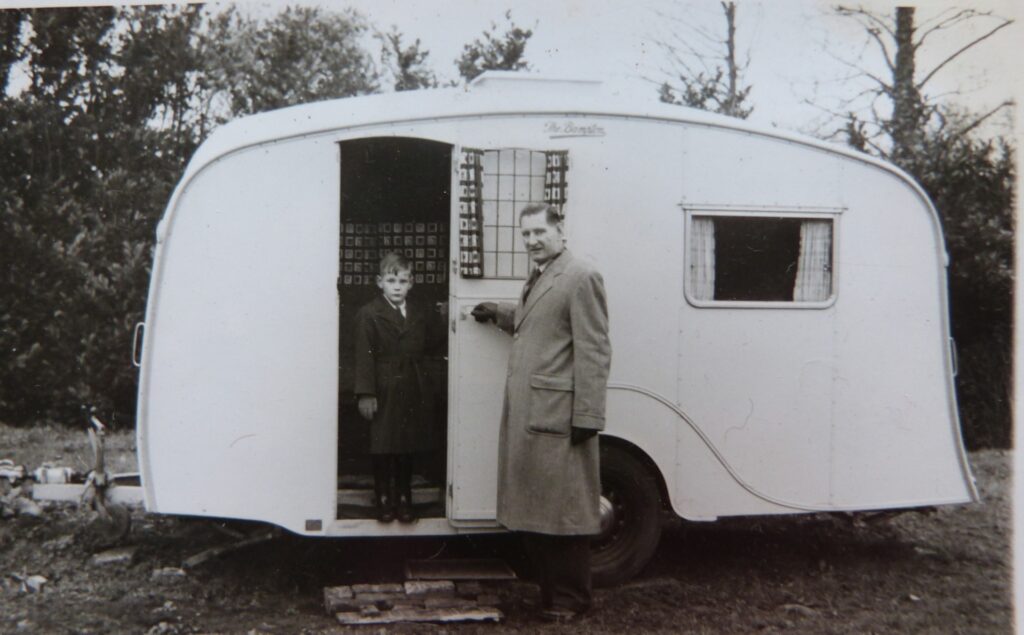 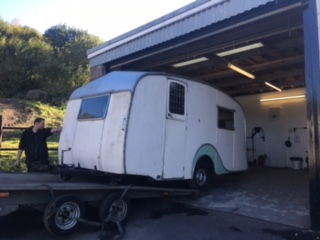 This is it on its first outing in 1954. I am in touch with the boy in the door, and have kept him updated with progress on the caravan.

On arrival, the outside obviously needed repainting and all the window rubbers needed replacing, the door and glass needed refurbishing and the wheels and rooflight needed attention as well.

Due to the age of the caravan, the insurance company I was using insisted that the brakes and running gear were examined and pronounced roadworthy by a professional caravan repairer. This was duly done, it just needed a new brake rod and the drums needed a clean. The lights were not working, but a lighting board fitted temporarily on the back was deemed acceptable.

Incidentally, the caravan when built was illegal, as it had indicator lights fitted which were not allowed in law until 1954.

Inside, I was not sure what would need doing, so I removed all the furniture first, so that I could work on it over the Winter in my workshop, leaving the outside until warmer weather.

The glass was repaired by a specialist craftsman in Llandysul. The wheels shotblasted and powder coated and a new rooflight made from Perspex.

The furniture was all stripped back to bare wood, repaired where necessary, then stained and wax polished.

I then tackled the inside walls and ceiling. Initially I thought that there were just a few panels to replace, but eventually decided to replace them all. New 1” thick fireproofed polystyrene insulation was installed (94 panels, all different sizes). This was then covered with oil tempered hardboard (18 8×4 sheets in total).

The inside was painted with a premium emulsion.

Meanwhile the outside was stripped (of gloss, emulsion, and sandtex.)

All cover strips were removed, the body straightened, then joints sealed and strips replaced.

Working from the 1954 photos, the bodywork was put back to its original colour, with bare aluminium left as it was originally in places.

The outside was professionally resprayed, then the windows and door replaced, as were the interior cover strips.

Parquet effect lino was laid, the furniture then replaced and the upholstery chosen and ordered.

The curtain material had been found on eBay some months before and is a Laura Ashley 1982 fabric from their (then) vintage range. My wife made the curtains, scatter cushions etc.

Since buying the caravan, I had been sourcing items to go with it, including a brass kettle, fire extinguisher, Elsan toilet and hard toilet paper, grocery items etc.

A new canopy has been purchased, using poles from a 1950 marquee with brass finials first used in 1922 on a street banner used on the tops.

The first outing will be at the beginning of August 2022 to the South Cerney Steam Rally near Gloucester.

So being locked down wasn’t a complete waste of time! 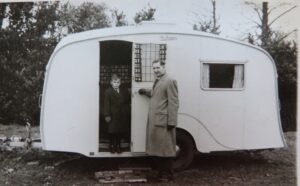 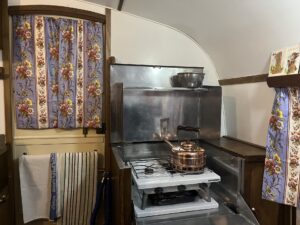 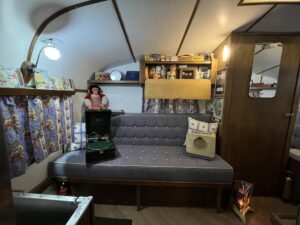 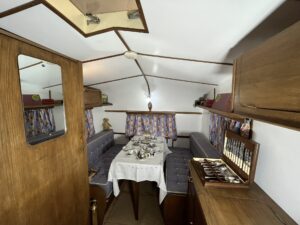 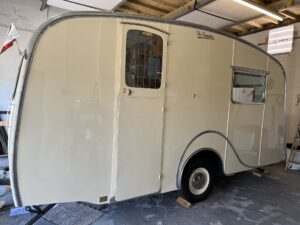 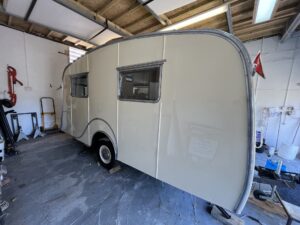